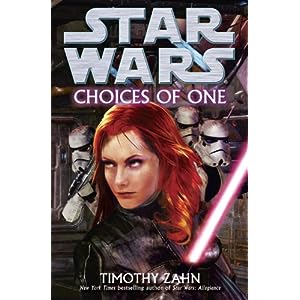 Timothy Zahn’s latest novel, Choice of One, was released yesterday, July 19.  I’m not quite up to this time-frame in the Star Wars universe yet, but I have ordered the book, regardless.

Here are some reviews I’ve found about the book..

“Star Wars: Choices of One, reintroduces Timothy Zahn back to the Star Wars universe and does so with his usual stellar storytelling and intricate story arcs. Set nearly a year after the events of the battle at Yavin, Zahn brings us back to a time when Luke Skywalker is still a young man trying to find his way in the vast and sometimes dark galaxy he calls home. Along with fan favorites Han Solo, Princess Leia and the now fallen Mara Jade and Chewie, Luke Skywalker sets forth to find a new base to stage their next moves against the Imperial armament. ”

“…It is amazing to see caring good people like Mara and the storm troopers Hand of Judgment believe that the Emperor is a kind person who cares for his subjects. That soul searching element enhances an action-paced space opera. Readers will praise Timothy Zahn as he captures the original essence of the Lucas pantheon; not an easy mission to achieve since this would make a fine movie number 4.5 (in between A New Hope and The Empire Strikes Back). “